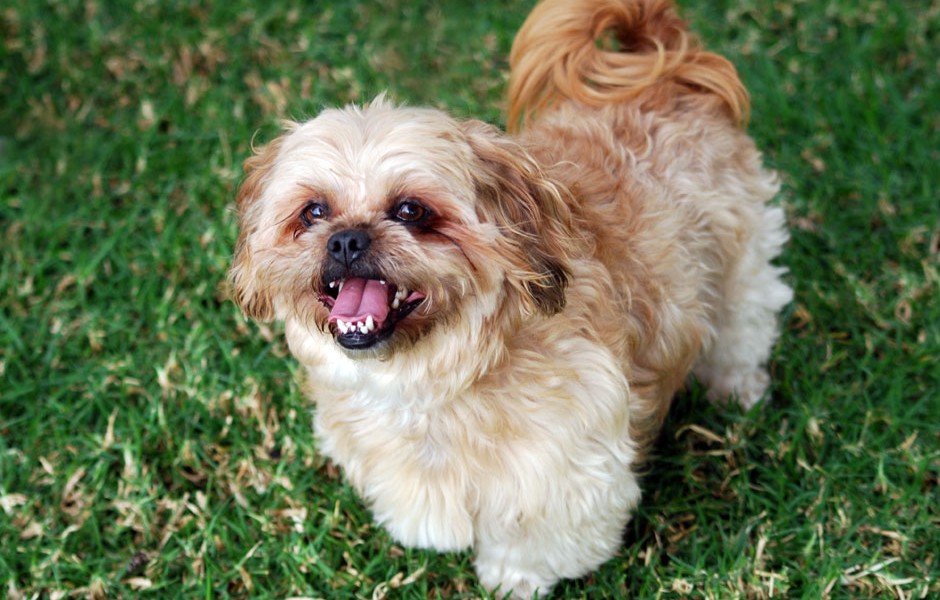 Many owners mistake a pushy, assertive dog for an aggressive dog, and it important to understand the difference between the two and address the relative behaviors accordingly.

The purpose of this article is to help conscientious dog guardians understand the difference between a dominant dog that is assertive or circumstantially aggressive, and an inherently aggressive dog. Some possible solutions are also offered to help Lhasa guardians whose dogs are demonstrating some challenging behaviors.

As a trainer who has successfully trained and rehabilitated dozens of Lhasa Apsos for Lhasa Happy Homes, I can attest that it is common for a frustrated and frazzled guardian to bring me an unruly, yappy, stubborn or anxious dog. While we will address the Lhasa behavior challenges, the same theories can apply to Shih Tzu, Maltese, Pekingese and other small breeds (or large breeds) that possess dominance issues. I am often asked to assess dogs that guardians describe as “aggressive” and “dominant.” Though the two behaviors are inherently linked, these terms are often erroneously used interchangeably. There is a BIG difference between dominance and aggression.

Most Lhasa aren’t hyperactive, but they aren’t couch potatoes either…. at least not when they are young. Lhasas are loving, loyal, intelligent and assertive dogs, but keep in mind that they were bred by the Buddhist monks to guard Tibetan Palace walls, and when given a job, like most breeds, they do it well. This breed needs to keep busy, and if they are bored, Lhasa CAN BE pushy, over assertive and get themselves into trouble, which can be mistaken for aggressive behavior.

Additionally, it is common for small dogs to have the dreaded ‘Napoleon Complex,’ and Lhasa are famous for this!! Even the most calm little one can feel threatened when they see a larger dog, which can create behavior problems.

Lhasa are wonderful dogs for guardians who want a beautiful, smart and interactive dog…. but guardians must be willing to be their dog’s leader!!

Many of the dogs I see with behavior problems are allowed to do one or more of the following: 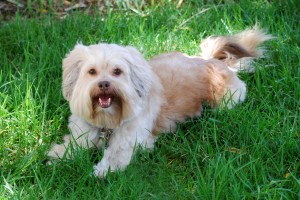 These are dominant behaviors. Is it any wonder when a dog is allowed to act like this why he should obey his guardian? In the absence of leadership, the dog has filled the void with his own rules – rules you probably won’t like. Dogs like this do not know where they fit in the pack and often end up trying to run the household. Left unchecked, dominant behavior can escalate into aggressive behavior.

It is normal for puppies and young dogs to experiment with aggression. In order get what they want, they will often try growling or puppy biting to see if it is effective. If the aggressive behavior is not corrected by their pack (dog or human) leader, then the dog will learn to use this behavior more often because it was successful for him/her in the past. Success breeds repetition.

In fact, aggression is not a phase that a dog outgrows. It worsens with time if the bad behavior is not corrected promptly and to the appropriate degree. If a dog demonstrates aggressive behavior, coddling him, ignoring the behavior or using extreme physical punishment can cause the behavior to worsen. Additionally, dogs take their cues from people. If a dominant dog senses a guardian’s lack of confidence or anxiety, he can interpret this as weakness and loss of control – which can cause the dog to be even more aggressive, again because it is effective. Clearly, acts of aggression needs to be corrected, however, the correction needs be meaningful to the individual dog. For example, if a dog growls at a stranger, uttering sharp ‘LEAVE IT’ or ‘NO!’ may be enough to stop one dog’s bad behavior. Other dogs may need a leash correction a squirt of water or be made to obey a command. If a guardian lacks the knowledge or confidence to control the dog’s bad behavior, the dog may take over or act out. Again, each dog is different and an experienced trainer can help determine what techniques will work best for a guardian and his dog.

Here is an example where a dominant dog can turn into an aggressive dog over something very simple: people knocking at the door. 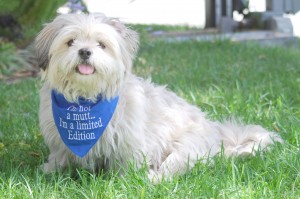 It is perfectly normal for a dog to bark when he hears someone at the front door – many dogs are protective. As the guardian walks to the front door the dog starts to get excited and perhaps bark. If the guardian doesn’t calm the dog down and let him know that everything is under control, the dog sees either the need to guard and bark – ‘Intruder! Invasion of the Dog Snatchers! Alert!’ or thinks ‘Woohoo, the person at the door is here to see me, me and only me’ and now the hysteria begins – and the dog continues growling, barking, jumping and acting badly.

Over time, some of these dogs become increasingly more excited or protective and will start to nip and bite, escalating into real aggression. The best solution is to calm your dog down and have him under control BEFORE opening the door (practice ahead of time, the dog may need to be put on leash). The rule in my house is, the door doesn’t open until my dogs are sitting or lying down. They understand that I have ‘claimed’ the door as mine, and there is no power struggle over it. It’s mine! When the visitors enter the home, the dogs wait to greet the visitor until they are called over.

By making a few changes and by controlling a dog’s behavior in a variety of circumstances, overly dominant or aggressive behavior can be minimized or in some cases, extinguished. Some simple things that can be done to keep a dog’s dominant behavior in check are: 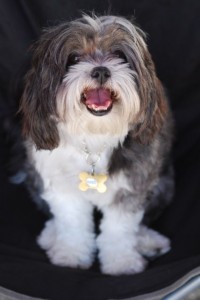 Consistency is everything when working with problem behavior. Though dogs are not children, I consider mine to be part of the family. Dogs think of their family as a pack. Therefore, it is important that everyone in the family treat the dog consistently. Dogs are excellent manipulators. If one person lets the dog jump on him or sneaks treats to a food begging or aggressive dog, these actions undermine the training process and unwanted behaviors may continue. Additionally, the importance of exercise can not be ignored. Lhasas are not hyperactive dogs that need to race around a barnyard all day, but they do need 1-2 daily walks that are 30-45 minutes long. Sitting in the house or the backyard (no matter how big or small the area is) can make these dogs nervous and anxious. Well-exercised dogs are usually well-mannered dogs!

In my experience, most dogs exhibit dominant behavior that guardians do not understand or respond properly to. Furthermore, most dogs do not attack unpredictably or have a ‘screw loose’. However, a dog may respond aggressively to environmental stimulus such as other barking dogs, strangers, noise, etc. But when a person assumes a strong leadership role with the dog, requiring him to behave appropriately in the face of the stimulus, the dog will eventually learn to calm down. Dogs are pack animals and they need their pack leaders to exert and maintain control.

To illustrate this point, let’s discuss another example of something that looks like aggression but is usually a situational response commonly referred to as Leash Aggression/Leash Emotion.

Leash aggression is one of the most common types of ‘aggression.’ This is when a dog lunges at people or other dogs while on the leash. A guardian will often say that his dog lunges ‘unpredictably’ on the leash or ‘attacks other dogs out of nowhere’, yet when the situation is examined, the dog is staring at the other dog with ‘hard eye’, his body tense and turned directly towards the other dog. His aggressive behavior here is very predictable. What makes this problem more perplexing to a dog guardian is that once his dog is off leash, he is often playful with these other dogs.

The root of this problem is that the dog does not believe his guardian is in control, or sees no reason to respect him, and therefore takes on the protective, dominant role. It is not uncommon for some of these dogs to behave in a violent manner while on the leash because they feel tethered and constrained. To make matters worse, the situation becomes even more unpleasant when the other dogs start to growl and lunge back. So much for a nice, relaxing walk with your dog! However, when the dog is corrected for the lunging and is taught to walk in a heel position (which in most cases is fairly easy to do), the leash aggression subsides or is greatly reduced. The leash aggression is diminished because the dog has learned that the guardian is in control of the situation, making the guardian the ‘Alpha Dog’ and pack leader. Also, the other dogs that are encountered on the walk do not feel threatened.

I have found that though dominance and aggression may go hand  in hand, they are not one and the same. We need to keep in mind that no breed is 100% safe nor is one dog in every circumstance. Guardians love their dogs so much and have a tendency to forget that their dogs are predators and carnivores. Dogs have teeth and claws and use them much like we use our hands. The same as with children, over spoiling or over correction will exacerbate problems. Making excuses for your dog’s bad behavior makes the problem worse. Bad behavior will not resolve itself and usually worsens with time. But remember, most problem behaviors can be improved with professional help. Dogs are our friends and faithful companions, and it is our responsibility to protect them, teach them and give them what they truly need, leadership.