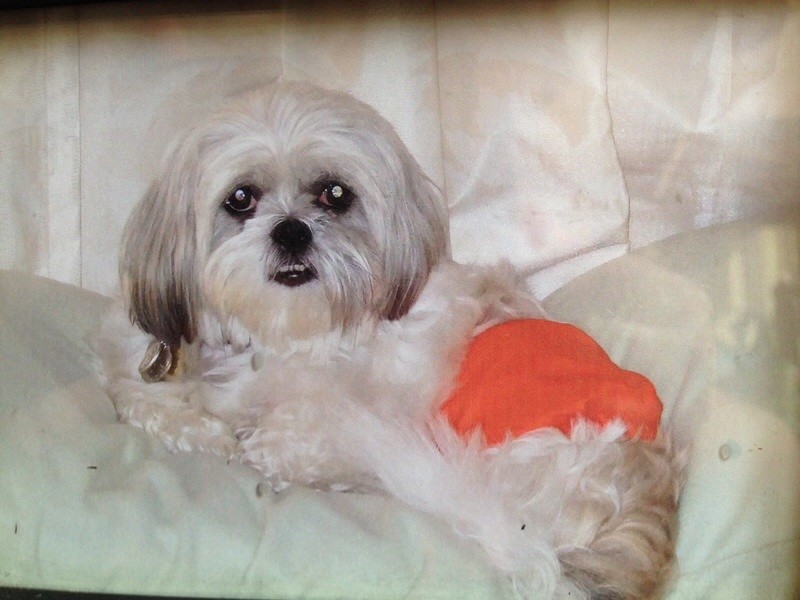 In the summer of 2007, I saw this fabulous little guy on the Lhasa Happy Homes website in their “Special Needs” section. This rescue does not shy away from taking older, special need or any pups with medical issues and I love them for that. His name was Toby at the time and he was 4.5 years old. His previous owner bred her dog, but obviously should not have for many reasons. Two of the pups died and Toby was born with with birth defects. His back legs are straight and none of the joints bend. His lower back and hips are malformed as well, so he has lived with arthritis and pain since a very young age. He has some nerve damage back there and does not walk, but uses both back legs as one to “hop” when he runs. He also does a handstand when he goes wee-wee and walks around the yard like that! Very talented! From what I know, he was left outside, where fox tails became imbedded all in his hind end, since he often drags his back legs when hopping becomes too much. Being too cheap and uncaring to have them removed by the vet, she instead told them to just euthanize him! Luckily, his rescue angel, Amber, and his fairy dog-mother, Randee, stepped in to save him.

Fast forward to 2014, his name is now Tonino Piccolino and he is approaching his 11th birthday at the end of this year. He’s fiercely independent and refuses to use his wheelchair. He’s got 10 times the personality of most people and is a constant joy! Please do not be afraid to give a home to a special needs animal. They give back so much more than you will ever give them!