Hooray! This dog has been adopted!

THIS IS VERSACE….a designer dog of which breeds we’re not sure!  A 13 lb, black with white chest, 1 yr old…..Lhasa Mix?  Cockapoo?  He can be whatever you want him to be… but what we can tell you he is a gem!  This boy came from the Orange County Shelter and was matted and had to be shaved.  Below is what he looks like with coat, a super fluffy puppy! 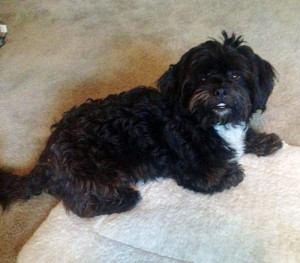 He was deemed aggressive :(.  The most aggressive thing we have seen him do is lick your face too much!  He is a special boy and, despite his age, he is mellow but playful….loves other dogs, people and even kids over 8 yrs old!  Versace got a bad rap at the shelter because he is puppy mouthy sometimes, but doesn’t have a mean bone in his body.  His foster mom says “he’s perfect!”  He does have a bad habit….he will demand to sleep in bed with you!  He’s great in the car, on the leash and when he has to do his business?  He stands by the door and waits to go for a walk!  If you are a family, with a yard and a lot of love, another canine and even kids….Versace would love to make your house a home!  If you have room in your heart and life…..he’s waiting for you to come and take him home!

Hooray! This dog has been adopted!